Lim was a decent business man. He was not the type who was involved in shady businesses nor had bitter rivals. Tony couldn't understand why one would want to snatch Lim's son.

On the morning of the fourth day of Steve's disappearance, Lim received a phone call from the police. A few hours before, they had fished out the dead body of a boy around Steve's age off the shore of East Coast Park. Besides the dead boy, they also fished out some toys and a shoe.

Lim hurriedly left for the mortuary. He was asked to identify whether the dead boy was his son, Steve. Tony was informed of the situation.

To Lim's pleasant surprise, the dead boy was not Steve. However, the shoe that was found belonged to Steve. Was it a coincidence?  Was Steve dead too?  Lim was worried and couldn't eat his lunch that day.

Tony analysed the situation, about the shoes and the dead boy. He was a clever and experienced detective always looking things from many angles. Besides, he also has an analytical mind.
Looking at the time the corpse,toys and shoe were found in the seas of East Coast, Tony knew that the tide must have brought them into Singapore from the Java Sea. It might be from the island of Sulawesi or Bintan. 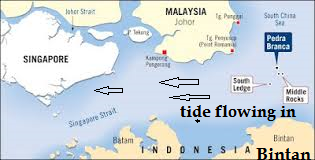 Tony using his secret satellite imagery system like the one Google Map is using started to zoomed into the Island of Bintan and Sulawesi. It may take a whole day to scan the two Indonesian islands for the whereabouts of Steve.